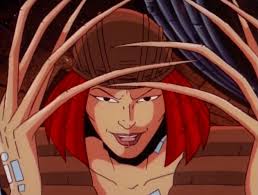 Yuriko Oyama is also known as the Reaver, Lady Deathstrike.

Sometime in her past, Yuriko once dated Logan, but they had to break up when he was summoned by Weapon X and experimented on, obtaining his adamantium laced skeleton. Once Logan killed her father, Kenji Oyama, Yuriko desired revenge and turned herself into the cyborg assassin, Lady Deathstrike. Deathstrike formed the Reavers and later set out to find a crashed spaceship in the tunnels of the Morlocks. The Reavers and her tricked Logan (now the X-Man 'Wolverine') and a few of his teammates to come down to the tunnels. Once they arrived, the two teams fought and Deathstrike accidentally opened the ship, releasing the Spirit Drinker. Deathstrike teamed up with Wolverine and the X-Men to fight and they eventually did. Deathstrike and the Reavers then left.