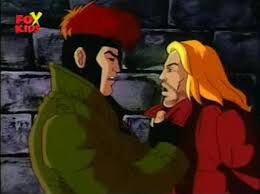 This is the sixth episode of the second season of X-Men: The Animated Series.

Cyclops, Jean Grey and Rogue are enduring a Danger Room exercise controlled by Gambit, which Cyclops complains is too easy. Gambit gets a phone call and accidentally knocks the difficulty lever up to maximum. Cyclops, as Rogue and Jean had left, is faced with robot versions of old foes, that are lethally dangerous. Gambit is informed that his brother, Bobby, has disappeared and he was supposed to bring a tithe to the X-Ternal. Gambit is reminded of the consequences of not bringing a tithe. Rogue goes to the control room and sees Cyclops struggling, so she stops the exercise. Rogue starts to shout at Gambit for almost killing Cyclops but he replies to her, saying that he has to go home as his brother is about to be killed.

Gambit has a flashback to when he was delivering the tithe to the X-Ternal and he was almost too late. The x-Ternal appears and accepts the Assassin's tithe, giving them strength and protection. The X-Ternal punishes the Thieves for being late and she chooses Bella Donna of the Assassins and Bobby of the Thieves to be the next chosen ones to present the tithe.

Gambit arrives in New Orleans and meet up with Pierre, who is the one who informed Gambit of Bobby's disappearance. Pierre states how the Assassins have kidnapped Gambit's brother and their tithe but will exchange them for Gambit. He and Pierre set off on a speed boat to see the Assassins while the rest of the X-Men arrive. Gambit and Pierre arrive at an old mansion where Bella Donna, Bobby and some Assassins are waiting for them. Bella Donna begins to shout at Gambit for leaving her at the altar. Bella Donna asks Gambit to put on his wedding ring and she'll let Bobby go but as soon as it's put on, Bella Donna uses that ring to make Gambit feel extreme pain.

Meanwhile, Wolverine, Jean and Rogue are caught in a trap set by the Thieves Guild and they are about to fight when Bobby arrives and tells the Thieves that they are in fact allies of Gambit. The group plan to rescue Gambit while, back at the mansion, Bella Donna has Gambit dressed in a tuxedo and plans to marry him. Bella Donna reveals that she gave the Thieves a fake tithe, so that they will be punished by the X-Ternal.

The Thieves and Assassins arrive at the tithe meeting, with Gambit alongside the Assassins. Gambit pushes Bella Donna out of the way and warns the Thieves that they have been given a fake tithe. A fight ensues while Jean tries to telepathically find the real tithe. The X-Ternal appears and rewards the Assassins for their tithe. She is about to punish the Thieves for bringing a false tithe until Rogue intervenes. As a result, the X-Ternal punishes her and the X-Men until Jean uses her telepathy to show the X-Ternal that the Assassins had sabotaged the tithe. The X-Ternal strips Bella Donna of her powers and Gambit leaves with the X-Men, saying he is never coming back.

In the Savage Land, Professor X and Magneto encounter Barbarus but they are able to fight him off.