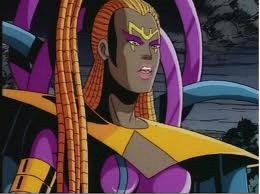 The X-Ternal is an entity which has guided the Thieves and Assassins Guilds of New Orleans for over 300 years.

The X-Ternal punished the Thieves Guild when they were late for a tithe meeting. She deemed Robert LeBeau and Bella Donna Boudreaux as the next Chosen Ones. 10 years later, the X-Ternal returned and was given a fake tithe by the Thieves after Bella Donna had switched their tithtes. Jean Grey used her telepathic powers to enable the X-Ternal to see the Assassin's treachery. The X-Ternal then took away Bella Donna's powers and then left again for another 10 years.