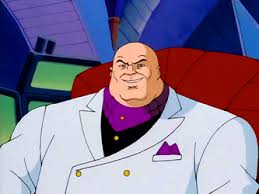 Wilson Fisk is also known as the crime lord, the Kingpin.

As a child, Wilson was very close with his father and would often help him out in his criminal activities. At one point, Wilson's father let his son get caught by the police just so he could get away. Wilson spent his time in prison and when he got out, he found himself a position in the mob. Wilson then arranged for his father to be arrested, as payback for his betrayal. As Wilson began climbing through the mob he became married to Vanessa Fisk and they had a son, Richard Fisk. Eventually, Wilson made it to the top of New York's crime syndicate and established himself as the 'Kingpin of Crime'.

After Spider-Man began appaearing in New York, Kingpin thought that he was a threat to his business. He had Norman Osborn hire Spencer Smythe to create a way of killing the hero. Spencer's creation, the Black Widow, failed at this and when Spencer was presumed dead, Kingpin took in his son, Alistair Smythe, and had him create more spider slayers to eliminate the hero. Kingpin secretly found that unconscious body of Spencer and had him kept in cryogenic stasis. When Alistair's spider slayers failed, Kingpin had Alistair stay with him until he had successfully eliminated Spider-Man.

When Norman was sick of Kingpin blackmailing him all the time, he unleashed Hobgoblin on the crime lord. Kingpin was saved by Peter Parker and later manipulated Hobgoblin into working for him, having the villain kidnap Norman's son, Harry Osborn. Hobgoblin later betrayed Kingpin and tried to take over as the new Kingpin of Crime but was eventually defeated by Spider-Man.

Kingpin later organized the release of Rhino, Shocker, Scorpion, Doctor Octopus, Chameleon and Mysterio and organized them into the Insidious Six. He commanded the six to defeat Spider-Man and take out Kingpin's rival, Silvermane. When they group failed they split and left Kingpin's command.

Kingpin later took Alistair's advice and framed Peter Parker for his crimes. This attempt brought Kingpin into conflict with Daredevil, had Spider-Man find out Kingpin's identity as Wilson Fisk and landed his son, Richard, in jail. Kingpin soon replaced Alistair with Herbert Landon, who transformed Alistair into a cyborg spider slayer. Kingpin then fought with Spider-Man and Alistair when they found out that Alistair's father was still alive in cryogenic stasis. Kingpin later outfitted Hobie Brown with the equipment needed to become the Prowler and also hired Johnathan Ohnn for his portal technology.

Kingpin later organized the jailbreak of John Hardesky to get his knowledge of the super soldier serum. Kingpin used this serum on Hardesky's daughter Felicia Hardy so she would become the Black Cat. However, Spider-Man and Black Cat teamed up against the Kingpin and Hardesky was returned back to S.H.I.E.L.D.

Kingpin later reorganized the Insidious Six, with Vulture replacing Mysterio, to help him locate the Red Skull's doomsday device. However, the group were betrayed by Chameleon and the returned Red Skull used the device to turn his son, Rheinholt Kragov into Electro.

Kingpin worked alongside Spider-Carnage, Alistair, Green Goblin and Hobgoblin but was unaware that Spider-Carnage aimed to destroy all reality.

Wilson Fisk was this reality's Spider-Man's lawyer but betrayed him for Spider-Carnage.