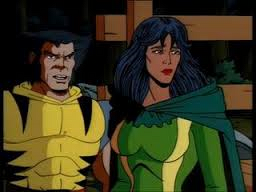 This is the eighth episode of the fourth season of X-Men: The Animated Series.

A flashback shows Wolverine and Silver Fox being attacked by Sabretooth in a log cabin. It is revealed that Wolverine is dreaming as other X-Men look at their teammate as he thrashes around in his sleep. Professor X tries to use his powers to calm Wolverine but a sudden shock makes the mutant wake up, jump out of bed, get in his jeep and drive off. Jean Grey finds a picture of Silver Fox with a map and co-ordinates, that was delivered to Wolverine recently.

Wolverine arrives at the abandoned Weapon X facility which triggers some flashbacks of his time there, revealing that someone had been messing with his head. Beast arrives to try and calm Wolverine down and he learns that his teammates is experiencing memories of training to be a killer. Sabretooth arrives, revealing that he too had been sent a letter and co-ordinates and he believes Wolverine is the person who sent them.

The two mutants begin to fight but both receive flashbacks of fighting Omega Red and Sabretooth leaving his teammates to die. Just then, both Silver Fox and Maverick arrive at the facility. Silver Fox states that Weapon X had did something to there memories and they all discover that their flashbacks were implanted and staged in the Weapon X facility. The four former Weapon X members begin to question their memories, with Sabretooth wondering if he actually did have a father who beat him as a kid.

Beast discovers a computer that shows that the four mutants underwent hypnotic suggestion so they could be placed as sleeper agents until their memories activated and they were summoned back to Weapon X. The group discover a door that can only be unlocked by the DNA of Wolverine, Sabretooth, Silver Fox and Maverick. Opening the door, they discover a video message saying that a robot named Talos has been ordered to kill the former operatives.

Talos is released onto the mutants but is eventually destroyed. It is then revealed that there are multiple Talos robots that will keep coming after the previous one is destroyed. A mental blast knocks out the Weapon X operatives and Beast manages to save them all before the facility explodes. The four then split up and go their separate ways.