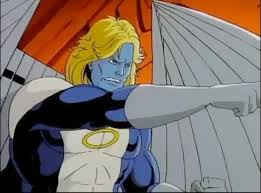 Warren Worthington III is also known as the former X-Man and Horseman of Apocalypse, Angel/Archangel.

Warren was approached by Charles Xavier to become of the original members of his X-Men, where he served alongside: Cyclops, Jean Grey, Beast and Iceman and took the codename 'Angel'. Warren later left the X-Men for unknown reasons.

Sometime after, Warren began to loathe his mutation and wished to be rid of his wings and funded the research of Dr Gottfried Adler, who was trying to develop a cure for mutants. However, when Warren visited Adler to receive the cure, Warren found out that Adler was actually Mystique in disguise and the 'cure' was actually a treatment to turn mutants into slaves of Apocalypse. Warren was turned into one of the Horsemen of Apocalypse 'Death/Archangel', with his wings amputated and replaced with metal versions and his skin turned blue. Warren served with the other horsemen until Rogue managed to touch the brainwashed mutant and absorb his servitude for Apocalypse. Warren became disgusted with himself and Apocalypse and vowed to kill him.

Warren became fixated on eliminating Apocalypse and he hired a team of scientists to research and work out a way of killing the ancient mutant. Unbeknowest to Warren, one of the scientists was actually Apocalypse in disguise, and he gave the former Horseman a false document detailing that Apocalypse had a weak point on the back of his neck and this could be used to kill him. Warren found Apocalypse and tried to kill him but the X-Men intervened and managed to save their former team mate before he was killed. Fully healed, Warren persuaded Rogue to help him kill Apocalypse but the evil mutant managed to escape them.

When Psylocke broke into his house, Warren followed the mutant thief back to a warehouse and witnessed her being kidnapped by Sabretooth and Magneto for Apocalypse. Warren went to the X-Men to ask for their help to rescue her. In the end, Warren and the X-Men managed to rescue Psylocke and the other mutants Apocalypse was holding captive.

Angel is seen as part of the mutant rebellion.