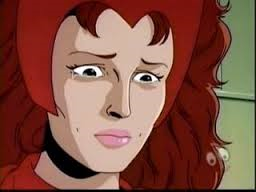 Scarlet Witch (born Wanda Maximoff) is the mutant daughter of Magneto, the twin sister of Quicksilver, and the half-sister of Polaris.

Not long after Wanda and her twin brother, Pietro Maximoff, were born, they were adopted by Django Maximoff and Marya Maximoff. Growing up, the twins realised they were mutants and later went on to join the mutant team, X-Factor, gaining their costumes and adopting the codenames 'Scarlet Witch' and 'Quicksilver'. The pair met their half-sister, Polaris and soon discovered that their father was the mutant terrorist, Magneto.