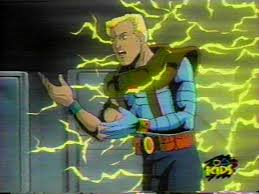 Tyler Summers is the son of Cable.

When their timeline was being decimated by a temporal storm, Tyler was caught in the storm and Cable was forced to go back in time and reverse the change in events that lead to the storm's origins. Cable succeeded and Tyler was restored. Later, Tyler grew older and joined Clan Chosen, a group of rebels opposed to the rule of Apocalypse in their time. Tyler helped to send Cable back in time after their Apocalypse had stolen Cable's time travelling device.