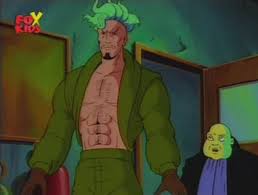 Trevor Fitzroy is a mutant from the future.

Fitzroy was ordered by the Master Mold of his timeline to travel back in time, to 1959, and assassinate a young Charles Xavier. This successful assassination created a timeline where the X-Men were never formed and the world was dominated by robots. Bishop and Shard went back in time, recruiting the Wolverine and Storm from the Xavier-less timeline, to prevent the killing. At first Fitzroy was successful and so he went back to the future and found out that Master Mold was planning to kill him. Learning this, Fitzroy helped the time travellers escape from the Enforcers and gave a message to Bishop that he then showed to the earlier version of Fitzroy that was about to kill Xavier. Being shown the message, the earlier Fitzroy then abandoned his mission and returned to his time.