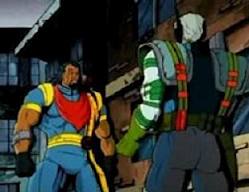 This is the eighth episode of the second season of X-Men: The Animated Series.

Cable, in the year 3999 AD, is making the preparations to travel back in time to stop the X-Men and Bishop from destroying a plague made by Apocalypse, when his son Tyler Summers runs into the room but is erased from time by the temporal storms devastating Cable's time. Cable travels back in time to the point where Bishop travelled back to and Cable tells the mutant time traveller that he can't let him change the future for the sake of his own timeline. Bishop shoots Cable through a wall and runs off anyway.

Meanwhile, the X-Men meet up with Bishop at the mutant quarantine building but Cable is also there preparing to sniper Bishop. However, the time traveller is spotted and confronted by Storm and Rogue and the three begin to fight. The rest of the X-Men try to fight Cable whilst protecting Bishop from him and juggling the crowd of anti-mutant protestors around them. Sick of fighting, Cable teleports away.

At his temporary base, Cable asks his A.I. cube about the X-Men and it tells him their strengths and weaknesses. Using this information, Cable deduces that he could be able to use Wolverine's healing factor to his advantage. Meanwhile, Beast is speaking at a press conference about the plague and how mutants do not carry the disease. Just after Graydon Creed Jr and the Friends of Humanity members start a fight, Cable teleports in and Wolverine attacks the time traveller. However, Cable manages to teleport away with Wolverine and later tells him that he needs his help in defeating Apocalypse and his plague.

The X-Men arrive at Creed's base and make their way down to the underground lab. The X-Men begin to fight Apocalypse and Cable and Wolverine arrive. Cable blasts Wolverine into the vials containing the plague and so infects the X-Man with the plague. However, his healing factor counter-acts the plague. The lab explodes and the X-Men, Bishop and Cable all escape the blast. Bishop returns to his own time to find that the plague was successfully prevented but the future is still abysmal.

Back at the X-Mansion, Beast examines Wolverine and finds that he has fully recovered from the plague, providing the anti-bodies Cable needed to save his timeline. Cable returns to his timeline to find that everything is restored to as before and Tyler is safe.