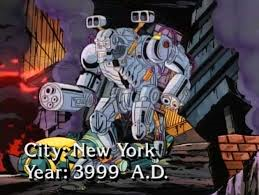 This is the seventh episode of the second season of X-Men: The Animated Series.

Cable and Clan Chosen are fighting Apocalypse and his robots in the year, 3999 AD until a temporal storm devastates the city. Cable questions his A.I. about what's happening and it explains how Bishop travelled to the past and stopped a disease from spreading, meaning mutants would die. It further goes on to explain hoe Cable's timeline is going to cease to exist.

We then see Bishop, having just returned from saving Senator Kelly, returning to his own time to find everything different. Forge explains how a plague is killing off most people in the city and that the X-Men no longer exist in their future at all. This makes Bishop go back in time to stop the plague from ever spreading. Bishop arrives in the X-Men's time and finds out that the plague has already started to spread.

Meanwhile, Jubilee is spotted in a mall by a Friends of Humanity member. The FOH member shoots gas at the person who was serving Jubilee and that man catches the plague. The FOH man declares that Jubilee is a mutant and she has given the man a plague. A crowd starts to close in on her but Storm saves her young team mate. At the mansion, Beast examines Jubilee and says that she is free of diseases. Curious, Beast breaks into a hospital and examines a sample of the disease.

Mutants are being quarantined throughout the city and targeted by anti-mutant protestors. Bishop arrives at one of the quarantine buildings and begins to open fire around the crowd, The X-Men arrive and briefly battle the time travelling mutant. They group come to a stand-still though and decide that Beast should inform the world about his findings of the plague, at a press conference. Meanwhile, Graydon Creed Jr and an unnamed scientist reveal that the plague is man made and designed to damage the image of mutants. But the scientist has a more purpose to cause a pandemic among humans and mutants.

At the press conference, Beast is trying to discuss the plague but Creed keeps heckling him loudly. Bishop tackles Creed to the ground and it is revealed that Creed planned to spray the disease onto Beast. Creed ends up infecting himself and tries to blame the mutants for giving him the disease. Back in 3999, Cable is running in a tunnel, watching the whole ordeal.

Back in the present, Bishop and the X-Men track Creed down to an abandoned mansion where Jean Grey tries to telepathically find Creed but is blocked by the unnamed scientist. The scientist says that Creed deserves the plague and the X-Men enter the underground lab. The scientist is revealed to be Apocalypse in disguise. Bishop manages to destroy the vials containing the plague and the team escape the exploding lab. In 3999, Cable is distraught to find that he has to help Apocalypse to save his future.