The Phoenix Saga Part 4: The Starjammers 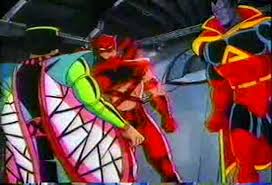 This is the sixth episode of the third season of X-Men: The Animated Series.

After sending Gladiator back into space (last episode), Phoenix is recovering when D'Ken Neramani's ships draw closer. Phoenix recovers and she explains how they need to fight to save the galaxy. She then flies off to space, sending psychic signals to various other around the globe including: Doctor Strange, Emma Frost and Captain Britain. Phoenix, Lilandra and the X-Men are transported to Lilandra's ship and the mutant team learn about how the M'Kraan Crystal is the object they are fighting over and how it has the capability to destroy the galaxy. Just then, the Starjammers board the ship and announce that they plan to kidnap Lilandra and take the M'Kraan Crystal for themselves. The X-Men and Starjammers fight and Cyclops almost blasts Corsair until Phoenix reads his mind and learns that Corsair is Cyclops' dad. The X-Men are knocked out. Waking up, the group realise that the Starjammers took the M'Kraan Crystal and Cyclops.

On D'Ken's ship, Erik the Red is being scolded by his emperor until Corsair sends a holographic message, saying that he will give up the M'Kraan Crystal and Cyclops if D'Ken gives up half of the Shi'ar treasury. D'Ken accepts but plans on having the Shi'ar Imperial Guard kill them anyway. However, Corsair reveals to Cyclops that he is planning on a double cross and wants to use Cyclops to blast D'Ken in revenge for killing his wife.

The X-Men and Lilandra are still chasing after the Starjammers when the space pirates arrive at D'Ken's ship and board it. Soon after, everyone begins fighting and Phoenix teleports the X-Men onto the ship. Corsair goes for D'Ken but realises it is actually Hobgoblin in disguise. After the skirmish, the Shi'ar adversaries escape and the X-Men are forced to escape. The group run into D'Ken who manages to get the M'Kraan Crystal. He starts to say an incantation and Phoenix tries to stop him but everyone is sucked into the crystal.