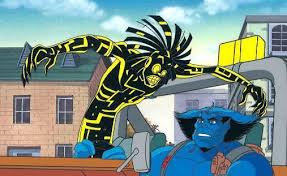 This is the first episode of the fifth season of X-Men: The Animated Series.

In New York, Sabretooth is going on a wild rampage aginst the police until Beast and Jubilee manage to bring him in. Taking the mutant back to the mansion, Jubilee asks Professor X if they should let Wolverine know that they've captured his arch-enemy. The Professor says that it'll be fine if he doesn't know. However, Wolverine does find out and heads down to the holding cells in the basement to confront Sabretooth, only to use his senses and find that it isn't Sabretooth at all.

The Professor gets a video-call from Mister Sinister, who pleads for help as he is being attacked by an unknown creature. Xavier ends the call and is attacked by a tentacle. Beast is in his lab when he too is also attacked. Whilst Beast uses Wolverine's jeep to drive away, the rest of the X-Men are trapped in pods. Thinking he has escaped them all, Beast is met by another of the creatures attacking them all. He introduces himself as Warlock and informs Beast that he is being attacked by his people, the Phalanx. Warlock explains that he is a peaceful Phalanx who crashed on Earth after being pursued by his people.

Beast manages to make a video-call with President Kelly and warn him about the invasion but finds that the Phalanx have already gotten to him. Beast then contacts Forge to get his help. Meanwhile, the Phalanx construct the 'Spire' which they will use to take over the world. Beast meets up with Forge and Quicksilver. The group are attacked by Phalanx-infected people, who manage to absorb Forge's metal leg. Warlock uses his shape-shifting ability to become a replacement leg for Forge as Mister Sinister arrives and lets the group escape on his ship. It is then revealed that the Phalanx's 'Spire' is in fact the Empire State Building, which the alien race has took over.