The Origin of the Fantastic Four Part 2 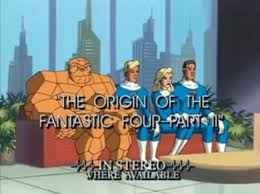 This is the second episode of the first season of Fantastic Four: The Animated Series.

Meanwhile, Thing and Alicia arrive at the Baxter Building and after a short encounter with landlady, Lavinia Forbes, the pair go to the FF's apartment. Human Torch answers the door and Thing immediately attacks him. Knocking out his teammate, Thing makes his way to Mister Fantastic's lab and starts attacking him as well. Mr. Fantastic notices that Thing seems to be in some sort of a trance. During the attack, Thing is covered with a liquid that turns him back into his normal, human appearance again and also removes the Puppet Master's influence over him. Having remembered some details, Thing introduces the confused Alicia and tells the Torch and Fantastic that the Puppet Master has Sue and is in the Village. The formula's effects soon wear off and Ben turns back into the Thing.

With the three FF members gone off to find Sue, leaving Alicia behind at the Baxter Building, the guards at the prison managed to regain order and control. However, Puppet Master takes control of the warden and forces him to let all the prisoners go free. The prisoners captured the warden while the Puppet Master watched on TV. Invisible Woman had managed to break free from the villain but he used his doll of her to recapture her. The rest of the FF arrive at the Puppet Master's house and find the villain controlling Sue. Puppet Master released a robot onto the heroes but they soon smashed it.

Escaping in a helicopter, Puppet Master throws Invisible Woman over the side but she is saved by Human Torch. Having noticed the prison riot on TV, the FF decide to fly over their and stop it. With the prisoners taking the news reporter hostage as well, the Fantastic Four arrive at the prison and soon restore order, rounding up the prisoners and freeing the hostages.

Some time later, Thing helped Alicia move into a new apartment, learning that she is a sculptor as well. Just as he left, Puppet Master arrived at the apartment. At the villain's old apartment, the FF figure out that Alicia would be the first person that Puppet Master would want to go after. Puppet Master reveals a doll of himself as a king, to Alicia and tells her of how he plans to topple the governments and take over the world. Both he and Alicia begin to struggle over the doll and it, as well as Puppet Master, fall out of the window. The FF arrive just then back the villain has vanished and has not been seen since.

Back in the present, Dick Clark thanks his audience for tuning in, as the telethon reaches $5 million. The presenter finds the Thing in the audience, forcing people to buy their book.