The Origin of Iron Man Part 1 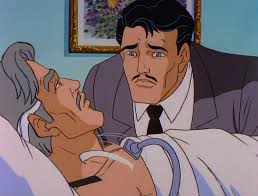 This is the eleventh episode of the first season of Iron-Man: The Animated Series.

Receiving an alert, Iron Man investigates a volcano that is about to erupt. Learning this, Mandarin summons Fin Fang Foom to fight the hero. Fin Fang Foom makes Mandarin give him a favor in return of his services. M.O.D.O.K. manages to cut off Iron Man's oxygen supply in the volcano and disables his signal to Stark Enterprises communication satellite. As he tries to escape the volcano, Iron Man is attacked by Fin Fang Foom and falls into an ice cave. Stark has to remove the armor and repair to be able to escape the cave, while The Hand are ordered to look for the hero.

Back in the flashback, Tony remembers getting damaged by shrapnel in his spine, which threatened Tony becoming paralysed. He was captured by the Mandarin and forced to make the villain a suit of armor to help him take over the world. Tony, with the help of fellow prisoner, Wellington Yinsen, get to work. In the present, Tony's repairing process has caused the ice cave to become unstable and start collapsing in on itself.