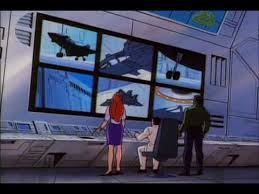 This is the fifth episode of the first season of Iron-Man: The Animated Series.

Tony Stark gives a demonstration of his new prototype jet, the 'Grim Reaper', to various military officers. Afterwards, Scarlet Witch asks Tony for some time off. The Hand sneak into the Grim Reaper's hangar and manage to steal the jet. Justin Hammer accuses Stark of not being able or wanting to deliver the Grim Reaper to the military.

Tony, James Rhodes and Julia Carpenter find that the jet is gone but the security tapes show it to still be there. M.O.D.O.K. tries to fly the Grim Reaper but is ejected out of the plane. Mandarin orders Hammer to keep Stark busy so he won't try to reclaim the jet. A crowd puts Stark back in therapy and Scarlet Witch returns. Stark then realizes how the villains stole the jet, by placing themselves out of time.

Force Works goes after the Grim Reaper and are able to bring back to the officers. However, after delivering the jet, Stark finds out that the officers he gave the Reaper were agents of the Mandarin. Mandarin flies the jet, planning to bomb the Pentagon, when he is chased by Iron Man. Eventually, Iron Man and War Machine are able to put the jet out of commission and, while the villain escapes, the two place the broken jet into the water.