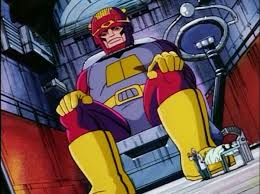 This is the thirteenth and final episode in the first season of X-Men: The Animated Series.

Magneto brings his hostage Senator Kelly (who he had kidnapped in the previous episode) to the rusting hull of a ship. Magneto prepares to kill Kelly, so humans and mutants wold go to war, when a group of Sentinels made out of plastic attack Magneto and abduct Kelly. Magneto attacks the Sentinels, using bits of the broken ship, but is soon defeated by the giant robots and left for dead. After the Sentinels had left, the X-Men, who were looking for Kelly, find the badly beaten Magneto and take him back to their mansion to heal.

Kelly is taken by the Sentinels to Bolivar Trask and Master Mold, revealing he had not been destroyed on Genosha (Slave Island). Kelly, who is now the President of the United States, issues out an order that the Sentinels be put in charge of controlling mutants. But, when a Sentinel does not carry out one of Trask's orders, Master Mold reveals that he is now in charge of the machines and he plans to replace the brains of the world’s leaders with computers.

After Charles Xavier scans Gambit's mind for information, the X-Men later find Henry Peter Gyrich who tells them of Master Mold's deception and plan to take over the governments of the world. The X-Men then travel to the Sentinel's base where they lure many of the robots outside. Storm, Rogue and Jubilee fight them to keep them busy. The other X-Men then manage to get underground and try to sneak into the Sentinel base but a group of Sentinels blocks their way. Gambit and Wolverine battle the Sentinels to allow the others to get into the base. Meanwhile, Master Mold tells Trask that he believes that mutants are humans so humans must be protected from themselves. Cyclops and Jean Grey manage to find Kelly and get him out of the base.

Xavier then flies the X-Men's jet, the Blackbird, which is full of explosives, into Master Mold, who has risen from his seat and crashed through the roof off the base. Magneto successfully protects the jet from any Sentinel attack. Both mutants escape the jet before it explodes. The X-Men reunite and manage to escape back to their base, with Kelly in-tow.

Kelly later releases a statement showing his changed opinion on mutants and how they could benefit and protect humanity. Beast is then released from prison while Scott and Jean have a picnic somewhere and get engaged. Sinister watches the couple through a hidden camera.