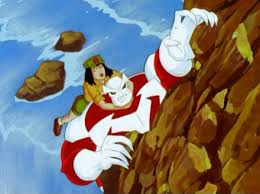 This is the fifth episode of the fifth season of X-Men: The Animated Series.

In South America, a young boy is being chased by the Hounds, who believe that the kid is a vessel for Apocalypse to use to escape from the astral plane. The boy escapes from the group, who then return to their base and inform Fabian Cortez of their failure. Fabian, in turn, informs Apocalypse, who is communicating with them through a status of himself.

Elsewhere in South America, Beast and Jubilee are on a archaeology trip. The two find a signpost which directs them to a temple. At the temple (Cortez's base), Caliban, one of the Hounds, is being punished by Cortez when they detect the mutant presences of Beast and Jubilee. The Hounds are sent out to find the mutants and Caliban finds them. The two are apprehended but Caliban states his dislike of having to use Jubilee to bring back Apocalypse. When Beast offers up his life to save Jubilee, Cortez uses his powers to increase Beast's mutation, turning him into a more savage form of himself.

Apocalypse accepts to use Jubilee's body as a vessel and Caliban is shot back when he suggests they look for another body. Beast, running wild in the jungle, eventually comes to his senses and hurries back towards the temple. As the ceremony for the possession is about to take place, Cortez takes away Caliban's augmented powers from him when he offers to replace Jubilee. Beast arrives and causes the cave to start collapsing in on itself. Cortez uses his power to remove Beast's augmented form but Jubilee zaps him with her blasts, allowing herself to escape.

Beast, Jubilee and Caliban escape and Apocalypse appears before Cortez, deciding to use his body as a vessel instead.