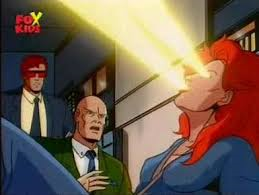 This is the fourteenth episode of the third season of X-Men: The Animated Series.

On Muir Island, Jean Grey is receiving treatment from Professor X and Moira MacTaggert, who are wondering how Jean managed to survive flying into the Sun, (The Phoenix Saga Part 5: Child of Light). In New York, Cyclops and Gambit are at a club where Dazzler is performing. The two are considering asking Dazzler to join the X-Men. After the show is finished, Cyclops heads outside and sees Dazzler being attacked by Donald Pierce of the Inner Circle Club. Pierce spots Cyclops and the two begin to fight, revealing that Pierce is a cyborg. Pierce manages to escape and Dazzler thanks Cyclops for saving her.

The Professor and Jean return to the mansion, with Cyclops and Gambit close behind, and Cyclops asks why Jean hasn't recovered yet. Xavier tells him that the Phoenix Force has not left her yet.

At the Inner Circle Club's building, the group discuss the Phoenix, which they have learned about through their psychic member, Emma Frost. The group plan to control the Phoenix and so Mastermind is sent off to try and control the mind of Jean Grey.

Back at the mansion, Jean's condition is worsening as the Phoenix is becoming more dominant of control. Cyclops leaves to go see Dazzler again. Emma and Mastermind start the process of manipulating Jean by placing her in a dream-world of the Victorian age, where she and Mastermind are married. Before the fantasy goes too far, Jean wakes up because of her psychic connection to Cyclops. She teleports to the club where Cyclops and Dazzler are at, just in time to see Dazzler kissing the X-Man. Heartbroken at seeing Cyclops kiss another woman, Jean falls back into Mastermind's fantasy and leaves with him.

The X-Men are summoned to look for Jean and they track her down to the Inner Circle Club's building. Rogue manages to break through a skylight and stop the wedding ceremony of Jean and Mastermind. The rest of the team break in and they fight the Inner Circle Club. Jean turns on her team mates, revealing that the Phoenix has taken full control of her body and mind.