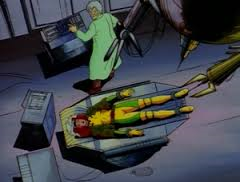 This is the ninth episode of the first season of X-Men: The Animated Series.

Angel and his girlfriend are sitting in a cabin somewhere, when they start discussing about a Dr Gottfried Adler, a scientist whom Angel states has gone to Scotland to do some research. Unknown to the couple, Cable has sneaks up on them, until he puts a gun to Angel and demands to know where Adler is. Cable the shoots Angel off the cabin's balcony where the winged mutant lands in the snow below. Cable then threatens Angel's girlfriend who tells him that Adler is on Muir Island. Angel then flies into cabin but Cable has escaped and Angel's girlfriend ends up firing at him by mistake.

On Muir Island Professor X asks Moira MacTaggert to look over Adler's work but she says she can't. Xavier then asks Adler if he can come visit him, but Adler denies it. Xavier decides to look through Adler's mind and sees the images of two mutant which leads Xavier to think that Adler is a mutant. Xavier then proceeds to tell the X-Men about Adler's work for a 'cure' for mutants.

Continuing the rebuilding of the mansion, which was destroyed in the previous episode), Wolverine and Gambit get into a fight until Rogue manages to break it up. The X-Men are then contacted by Xavier who tells them of Adler's cure on Muir Island. Rogue, intrigued by the possibility of a cure so she can touch people again, drives away from the mansion. Gambit is able to follow her until Rogue flies up to a passenger plane and stows away on it. When the plane flies over Muir Island, Rogue flies off to the island below.

Avalanche and Pyro are waiting in a pub on Muir Island for Mystique when Rogue walks in. The two mutants think Rogue is Mystique in disguise until she attacks the two, throwing Avalanche through the wall and over the cliffs below. Rogue then goes to see Adler and asks if she can have the cure administered to her. Adler says he will think about it and after Rogue leaves, it is revealed that Adler is in fact Mystique and she is working for Apocalypse. Apocalypse orders Mystique to make Rogue his slave. Rogue remembers back to her first kiss with Cody Robbins and how she had almost killed him.

Pyro is searches the bottoms of the cliffs for Avalanche when he meets up with Cable, who is still looking for Adler, and Pyro is shot by him. Pyro meets up with Avalanche, after Cable has left, and suggest that the two go kidnap Adler seeing as how many people want to see him.

Rogue goes back to Adler and the two agree to proceed with the treatment but then Pyro and Avalanche burst in and kidnap Adler. Cable arrives at the lab and he and Rogue chase after the villains. While escaping from the two mutants, Mystique reveals herself to have been masquerading as Adler, to Pyro and Avalanche who are her team mates. Back at Adler's lab, Xavier investigates while Cyclops and Jean Grey arrive at Muir Island, realising that Rogue must have gone to find the cure. Meanwhile, Rogue defeats Pyro and Avalanche, causing them to retreat, while Cable hangs Adler over a cliff, threatening to kill him because he helped to create the mutant nullifying collars used in Genosha (Slave Island). Rogue tries to stop Cable but he manages to subdue her. Mystique then reveals that she has been posing as Adler and that the real Adler was killed. Xavier, Cyclops and Jean arrive but both Cable and Jean fall of the cliff edge. Cable manages to hold onto the rocky clifface while Rogue saves Jean.

Not knowing that Adler is Mystique, Rogue helps the imposter to set up the equipment in the lab again before declining to take the cure and leaving. On the way out she almost flies into Angel who then asks Adler if he can receive the cure. After he leaves, Mystique tells Apocalypse that she has a new mutant for him and apocalypse says that he will take over the world.