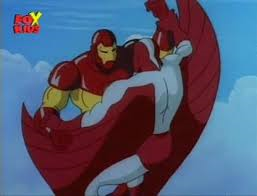 This is the ninth episode of the second season of Iron-Man: The Animated Series.

Justin Hammer announces to the media that he is giving the U.S. Army full use of his facilities in the campaign to stop Iron Man. He reveals his new robot, Firepower, which is created to defeat the armored hero. Iron Man confronts Firepower and finds that Hammer was the person who behind the stealing of his designs and selling them to Iron Man's enemies. Iron Man tries to use a Negator Pack on Firepower but it has no effect. Firepower fires a missile at Iron Man which blows up the armor, making the world believe that Iron Man is dead.

While she is grieving, Tony phones Julia and tells her that he was piloting the armor via remote control when it was blown up. Tony works on a larger, more versatile version of his Iron Man armor as Hammer orders Firepower to destroy Stark Enterprises. Iron Man in his larger armor fights Firepower and stops it from using a neutron bomb to blow up the future site of Stark Towers. Iron Man destroys Firepower and stops Hammer's plans to destroy his competitor's life. Elsewhere, Mandarin finds another of his rings.