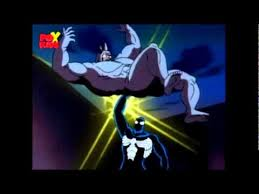 This is the seventh episode of the first season of Spider-Man: The Animated Series.

On an asteroid, John Jameson performs an expedition on the surface while his co-pilot, Paul Stevenson waits in the shuttle. John extracts a black rock from the surface which begins oozing black liquid and causes a seismic quake. As the ground begins to collapse, John quickly escapes back to the shuttle.

Back on Earth, Peter Parker, J. Jonah Jameson and Robbie Robertson watch the news, waiting for the shuttle to arrive. Also watching the report is Kingpin and Alistair Smythe, how grow curious over the prospect of securing Promethium X, the substance which John had extracted from the asteroid. On the George Washington Bridge, Eddie Brock is stuck in traffic.

On the shuttle, the ooze from Promethium X escapes confinement and attacks the astronauts forcing them to crash. As Jameson prays for his son's safety, Alistair tells Kingpin that he expects the shuttle to crash on the George Washington Bridge. Kingpin then contacts Rhino and tells him to go to the crash site to collect the Promethium X. Jameson hears the news of the shuttle's trajectory and flies out to the bridge in a helicopter while Peter changes and swings over as Spider-Man. While everyone begins to evacuate, Eddie stays on the bridge to get pictures of the crash.

Rhino is already on the bridge when the shuttle crashes. Spider-Man arrives and enters the shuttle to rescue the two astronauts but also finds the Rhino stealing the Promethium X. Rhino leaves but doesn't notice that he has a spider tracer on him. Eddie notices Rhino leaving the shuttle with a briefcase and Spider-Man rescuing the astronauts. Hearing a noise, Spider-Man goes back inside the shuttle but it falls into the river. Jameson arrives and tends to John and also finds Eddie who tells him that Spider-Man had stolen something from the shuttle, even though he knew it was Rhino. Jameson agrees to give Eddie his job back in return for the photos of Spider-Man. Spider-Man crawls out of the river with the ooze from Promethium X on him, which he mistakes for pollution from the river.

As Spider-Man's spider tracer fails to give off a signal, Rhino meets up with Kingpin and Alistair and gives them the Promethium X. Back at home, Aunt May watches the news of the Promethium X being stolen and Spider-Man being blamed for the crime. Peter arrives and is shocked to learn that Spider-Man is being blamed for the robbery. Jameson issues out a million dollar reward for the capture of Spider-Man. Peter goes to bed and throws his costume in the wardrobe but the ooze seeps out and covers Peter.

Peter dreams of being chased by a giant black ooze monster which is then fought by a giant Spider-Man. At the end of the dream, Peter is consumed by the giant monster and wakes up to find himself hanging upside down somewhere in the city in a black costume. Being chased by a helicopter aiming to collect Jameson's reward, Spider-Man finds that his abilities have been enhanced and his webbing now comes directly from the suit. Hiding from the police, Peter's suit suddenly changes into a police uniform, which he uses to fool the police and get away.

The next day, Peter ponders over his new suit and uses it to wear an Italian suit which he uses to woo Felicia Hardy. When Flash Thompson arrives and starts threatening Peter, Peter starts acting aggressively which scares both Flash and Felicia.

Elsewhere, Alistair tells Kingpin that he needs control rods to properly test the Promethium X so the crime lord orders Rhino to collect them. After an argument with Aunt May about Spider-Man, Peter sees that the Rhino spider tracer has become active so he sets off to track the villain down.

Rhino breaks into the government facility where the control rods are being kept but is confronted by Spider-Man. Spider-Man immediately begins thrashing Rhino, demanding to know where the Promethium X is and almost kills him with an iron door before coming to his senses and leaving, scared of how aggressive he is becoming.