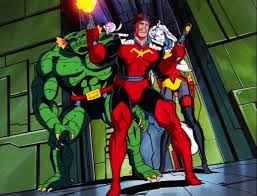 The Starjammers are a group of space pirates that usually travel within the Shi'ar Empire.

After he escaped from Shi'ar custody, Christopher Summers took on the alias of 'Corsair' and joined the Starjammers with various other members. When Lilandra Neramani was wanted by D'Ken Neramani, the Starjammers intervened and took the M'Kraan Crystal from her, taking Cyclops hostage in the process. Corsair set up a meeting with D'Ken about exchanging the crystal and Cyclops for freedom within the Empire but Corsair revealed he planned to double-cross D'Ken at the last minute. When the Starjammers docked on D'Ken's ship, they were attacked by the Emperor and the Shi'ar Imperial Guard. The X-Men and Lilandra arrived but D'Ken took hold of the crystal and everyone was sucked inside. The Phoenix Force managed to save everyone and destroy the crystal by flying it into the sun.

Later, when they had taken hold of a young child Jandra, the Starjammers were pursued and crashed on Earth. Corsair sought the help of Cyclops and Storm, in the process realising that he was Cyclops' father. The Starjammers reunited and teamed with the two X-Men, defeating the evil Commander Raknar and flying back off into space.