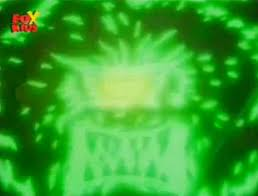 The Spirit Drinker is an alien entity who needs to drain life forces to survive.

Imprisoned by the Shi'ar, the Spirit Drinker was put on a prison ship that crash landed in the Morlock tunnels, on Earth. The Reavers tried to get into the crashed ship and it was accidentally opened during a fight between the villainous group and the X-Men. The Drinker immediately absorbed the life force of various Reavers before chasing after the X-Men and Lady Deathstrike. The Drinker tried to get to the surface of New York and absorb the life force of all its citizens but it was killed by Wolverine.