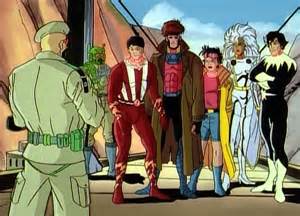 This is the seventh episode of the first season of X-Men: The Animated Series.

Having been captured on Genosha in the previous episode, Storm, Gambit and Jubilee are forced into slave labour after waking up in a detention centre, wearing collars which nullify their powers. They are forced into helping to build a dam along with the other captured mutants. Their collars are switched off when they are put into work and Storm immediately tries to escape when hers is deactivated. However, straight after she starts to fly into the air, her collar is switched off and she falls back down. Bolivar Trask orders a Sentinel to kill but Gambit steps in and persuades Trask into thinking that Storm could be useful for providing water once the dam is finished. Instead of being killed, Storm is put into a small dark cell which sets off her claustrophobia. As the mutants go to work on building the dam, they notice a fire in the nearby forest. Guards are sent to apprehend the person responsible and the mutants are sent back to their cells. That night, a powercut makes the mutant detention centre loss all power and Jubilee manages to breakout of her cell. She tries to rally Gambit and the other mutants in an escape attempt but none will join her. As the power returns Jubilee goes back into her cell.

Back at the mansion Wolverine returns from his trip to Canada (previous episode) and finds that the other X-Men can't contact their team mates on Genosha. They decide to go to the island and see if they are ok but Professor X decides not to join them as he has personal matters to attend to. When the team have left, he calls his friend, Moira MacTaggert.

Back on Genosha, Jubilee wakes up in the night to see Gambit being taken away by the guards. The other captive mutants then agree to her escape plan but they are ambushed by guards who were waiting for them. It turns out that Gambit had told them about the escape plan. The other mutants are returned to their cells while Jubilee is put into the same small cell as Storm, who is now delirious due to her claustrophobia but is determined that Gambit will save them.

In an factory on Genosha, Trask reveals Master Mold a giant Sentinel who produces the robots, to Henry Peter Gyrich, the Leader (a former colonel and who is in charge of Genosha) and Cameron Hodge the 'Development Advisor to the Government of Genosha'. It is then revealed that the dam is being built to power Master Mold as he is taking too much energy form Genosha's power grid. Gambit is then brought in and Gyrich questions him about the X-Men and, in turn, Gambit promises to lead Gyrich to them. Gambit is then taken back to his cell but on the way he manages to escape his custody and runs into a heavily armed man called Cable who drives off the guards and gives Gambit a key to the power dampening collars.

Meanwhile, Hodge is talking about Cable and how he used to be a mercenary in the Leader's army until he realised that the Leader was not as in favour of democracy than he first thought. Cable left the Leader's army and drifted away. They also think that Cable may be a mutant. Gyrich then says that he will have Cable taken care of if the Leader will provide him with large quantities of power dampening collars and just before the deal is made, Cable attacks the factory.

Gambit destroys the Sentinel guarding Storm and Jubilee and the three mutants attack the dam and manage to free the captive mutants from their cells and collars. The mutants refuse to help the three X-Men to destroy until they have taken control of Genosha and then they leave.

Cable starts to destroy the factory, eliminating many Sentinels along the way and managed to track down the Leader. Master Mold then creates a smaller version of a Sentinel which stalks and attacks Cable. The Leader escapes while Cable fights the Sentinel but the fight is soon over and Cable again proceeds to chase his former colonel. Storm then causes a thunderstorm and heavy rain with her powers which causes the dam to be destroyed. Storm faints from exhaustion but Rogue, who, along with the other X-Men, had just arrived catches Storm and takes her to safety.

As the Leader and Hodge are trying to escape, planning to go to Switzerland, Cable blows up their car. He gets to the Leader but Hodge points a gun at him. Before anything can happen though, the wave of water from the destroyed dam, comes towards them and Cable laughs as it hits the three of them. Inside the factory, Master Mold is trying to escape the flood but he can't due to him being plugged into the factory. The factory is then destroyed by the wave.

The X-Men, now with Storm, Gambit and Jubilee, escape from Genosha and return to their mansion, only to find that it has been destroyed.