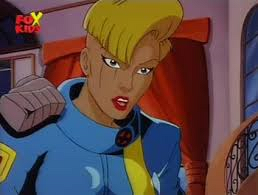 Shard Bishop is a time-travelling mutant and the sister of Bishop.

When Forge detected an anomaly in the time stream he sent Shard and Bishop back in time to fix it. The pair arrived in a reality where Professor X was killed in his youth and the X-Men were never formed. Allying with the Wolverine and Storm of this reality, Shard and Bishop travelled back to 1959 to stop Trevor Fitzroy from assassinating Xavier. The group initially failed and so they went back to try again and ended up travelling to an alternate future where Master Mold ruled. Shard was shot by a Nimrod but when the rest saved Xavier, she was brought back to life.

Later, when Bishop became trapped in the Axis of Time, Shard travelled back to the X-Men's time to look for him. Allying with the team, Shard helped Wolverine deal with a fight between Archangel and Psylocke. Eventually, Psylocke was kidnapped for Apocalypse and Shard helped to fight against him. After the villain was defeated and Bishop returned from the Axis of Time, he and Shard returned to their own time.