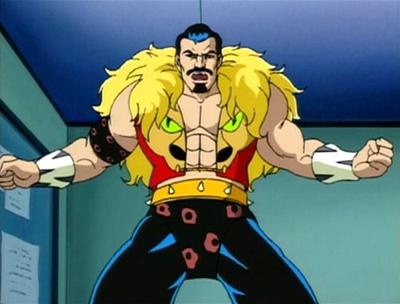 Sergei Kravinoff is also known as the primal, Kraven the Hunter.

Born from Russian nobility, Sergei was once a hunter in Africa before later becoming a guide. He was hired by Dr. Mariah Crawford and her expedition crew to serve as their guide whilst trying to find James Reeves. Sergei and Mariah fell in love at this time and he saved her from a pack of hyenas. Mariah was forced to give Sergei an unknown formula, acquired from Reeves, which healed Sergei but had other side effects. Sergei began to change, becoming more bestial in nature and started calling himself 'Kraven the Hunter'.

When Mariah headed to New York to find a cure for Kraven, he followed her there, thinking she had another lover. When he confronted Mariah, Kraven was attacked by Spider-Man, who rescued Mariah and took her to safety. Kraven tracked her scent to Robbie Robertson's house, where he kidnapped the reporter, thinking he was Mariah's other lover. Kraven then tracked Spider-Man's scent and confronted him, telling him that he had Robbie and ordered the hero to bring Mariah to Central Park Zoo. Kraven then fought Spider-Man at the zoo, where Mariah was put in peril with a lion. Kraven saved Mariah from the lion and she managed to give the Hunter an antidote that she had concocted which reverted Kraven back to Sergei. Sergei and Mariah later travelled back to Africa.

When disease struck the area of Africa where Sergei and Mariah were staying, Mariah became infected and Sergei was forced to use the same serum which turned him into Kraven on his beloved. The serum had the same effects as before and Mariah turned into 'Calypso' and escaped to New York. Sergei took the serum again and became Kraven the Hunter once again and pursued Calypso. Once back in New York, Kraven teamed with Spider-Man to bring down Calypso. With some help from Debra Whitman, Calypso was restored and again, both her and Sergei left for Africa.