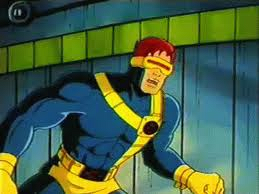 Scott Summers is also known as the X-Man, Cyclops. He serves as team leader when in the field.

When he was just a child, Scott's parents died in a plane crash, after making Scott and his brother, Alexander Summers, parachute out of the plane with the only parachutes. Scott and Alex were then placed into orphanages and Scott didn't see his brother again in many years. Scott was later recruited into the first ever line up of the X-Men. There, he met Jean Grey and fell in love with her. Scott has stayed with the team throughout its changes and has usually always served as team leader in the field. Scott and Jean were once kidnapped by the Morlocks when their leader Callisto wanted to produce an heir with Scott. He was later freed by the X-Men and almost killed by team mate, Wolverine so that he could try and be with Jean instead off Scott.

After saving Senator Kelly from Master Mold and his Sentinels, Scott and Jean became engaged and tried to get married. At their first attempt, the priest was found to not actually be a priest and so the marriage was not classed a such. Jean later became a host for the Phoenix Force and it was during this time that Scott found out his father had survived the plane crash and became part of a group called the Starjammers, under the alias of Corsair. Scott later met his brother again, although neither knew they were related, when the X-Men battled X-Factor.

Scott and Jean were later officially married but Mister Sinister managed to kidnap Jean on their honeymoon. Scott and the X-Men later rescued Jean from Sinister. After Professor X was gravely injured and taken to the Shi'ar, Scott, presumably, took over as leader of the X-Men.

Cyclops was known as 'The Handsome Prince' in Jubilee's story, where he ruled over the Kingdom with his bride, Princess Jean.