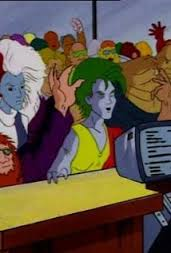 This is the twenty first episode of the third season of X-Men: The Animated Series.

Magneto kidnaps some astronauts and crashes into the UN. There, he announces on TV that he has established a living space on an asteroid in space for all mutants who wish to be away from humanity. Professor X, watching Magneto's speech, is saddened as he thinks that he has failed in his mission to bring humanity and mutants together. Gambit wonders if he should leave for Asteroid M as he starts to doubt that the X-Men are making much progress towards their goal. The Professor talks with President Kelly, who is worried about Magneto and if he has any real intentions.

Professor X, Beast and Gambit head off to meet with Magneto whom they find preparing to send a batch of mutants up to the asteroid. Magneto joins the group as they travel to Genosha, where mutants are still being captured and used for slave labour. On the island, the trio of X-Men, Magneto and his followers, including the Acolytes fight a group of Sentinels. After the fight, Fabian Cortez suggests that all the humans be murdered but Magneto just releases all the captive mutants and everyone travels up to the asteroid.

Once on Asteroid M, Magneto deals with a laser satellite attack, thinking it was an unprovoked attack on the mutants, but learns that it was a retaliatory attack as a missile had been fired from the asteroid. Professor X meets up with his ex-girlfriend Amelia Voght but she abruptly denies him. Magneto learns that Cortez fired the missile but also finds out that he is dependent on Cortez's powers and so he fires Magneto out into space, in a capsule. Cortez then blames the X-Men for assassinating Magneto.