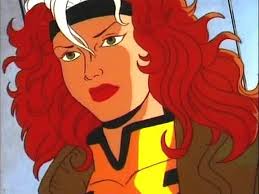 Rogue's real name is not known but she is a member of the X-Men.

Rogue's absorption powers first developed when she was kissing her boyfriend, Cody Robbins, who was put into a coma after this event. Rogue later ran away from her house because her father hated her as she was a mutant and was later adopted by Mystique. Mystique trained Rogue to use her powers effectively and got her to join the Brotherhood of Evil Mutants. During her time in this group, Rogue stole and destroyed many things and this continued until the Brotherhood encountered Ms Marvel. Rogue used her powers on Ms Marvel which caused her to permanently keep the heroine's powers as well as a copy of the heroines consciousness. Ms Marvel was then put into a coma which she would stay in for many years. However, Rogue was permanently attacked by Ms Marvel, who made Rogue believe that she was being haunted by the heroine and, when this torment became to much for Rogue, she left Mystique and the Brotherhood and joined Charles Xavier and his X-Men. Xavier managed to block Ms Marvel's attacks and help ease Rogue's pain. Mystique vowed to get Rogue back from Xavier but she never did.

Whilst with the X-Men, Rogue had a complicated relationship with Gambit. The pair both had feelings for each other and flirted with each other but they often fought and could not have an intimate relationship due to Rogue's powers.

Rogue, Storm and Gambit once saved Jubilee from a Sentinel who wanted to capture the young mutant. Jubilee later joined the X-Men. When Rogue heard of a supposed cure for mutants, she left for Muir Island, where Dr Gottfried Adler (the person who had invented the cure) was stationed. Rogue was tempted to receive the cure but she decided not to. Eventually, it turned out that Adler was in fact Mystique in disguise and the cure was actually a process of turning mutants into slaves of Apocalypse. Later, Rogue absorbed the evil side of Archangel, setting him free from Apocalypse and horrified by what he had done. After preventing Mystique from assassinating Senator Kelly, Rogue found out that her foster mother from her teenage years was actually a shape shifting mutant.

Mystique, encouraged by Mister Sinister, tried to get Rogue back by making her remember her days in the Brotherhood and her attack on Ms Marvel, which Xavier had wiped from Rogue's mind. Mystique started disguising herself as Carol Danvers, bringing Rogue's memories to the surface and causing her to be haunted by visions of a green skinned monster version of the heroine. Rogue was made to confront the copy of Ms Marvel in her mind and almost seriously hurt her team mates whilst trying to fight her visions. Rogue became extremely upset as she thought that only Professor X could help her but he was missing at that moment in time. Rogue was lead to the hospital where Ms Marvel was in a coma and she absorbed the memories of Mystique to learn of the past that Xavier had made her forget. Rogue angrily reacted to Mystique, as she was furious that she was used as a weapon. Jean Grey later used her powers to block out Ms Marvel again and Rogue visited the comatose Danvers, transferring her conscious back to the heroine.

Rogue stayed with the X-Men continuously and was present when Xavier was taken to the Shi'ar empire for urgent medical attention, effectively leaving the X-Men.

Intelligence: Even without her powers she is skilled enough to defeat a horde of aliens, best an alien captain in a sword fight, defeat several Morlock clones in hand-to-hand combat and take down armed thugs with Gambit's staff. She has also shown capabilities in piloting, planning and attack pattern detection.

Standard Equipment: Gloves to prevent her powers from working on her teammates, but otherwise none

Weaknesses: If she touches an enemy briefly, she only retains the powers for a limited time. Sufficiently strong wills, such as that of Spiral, can override her own, and possess her. She can be overloaded, such as when trying to absorb the power of the star-splitting technarch Magus.