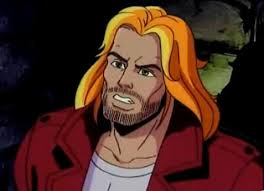 Robert LeBeau, better known as 'Bobby', is a member of the Thieves Guild and the brother of the X-Man, Gambit.