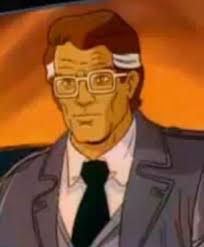 Robert Kelly was a politician and Senator in the United States who took an active anti-mutant stance. After a fight between the X-Men and Magneto at a chemical plant, Kelly announced that he was going to run for President in the upcoming election, after condemning the previous President's lack of action towards mutants. Kelly was later almost assassinated by Mystique, who was posing as Gambit, because of his anti-mutant behaviour. He was saved by Bishop and the X-Men but was later kidnapped by Magneto. Magneto planned to kill Kelly but he was then attacked by a group of Sentinels who took Kelly to Master Mold, who planned to replace the brains of the leaders of the world with computers. Kelly was again saved by the X-Men and this experience made him acknowledge that not all mutants are dangerous. When he became president, Kelly immediately released Beast from prison.

During a press conference where Kelly was releasing a statement, a member of Friends of Humanity dressed up as a mutant and began attacking the conference. This lead to anti-mutant riots across America which Kelly tried to quell but was unsuccessful. Kelly continued to work with the X-Men throughout his Presidency and helped them with numerous threats.