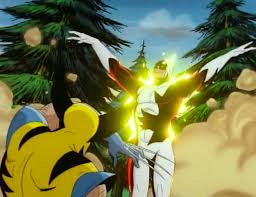 This is the fifth episode of the second season of X-Men: The Animated Series.

Wolverine is in a forest in Canada, having been asked to come by Heather Hudson, when he is ambushed by Alpha Flight. Vindicator reveals that it was actually himself who requested that Wolverine come back to Canada. The team fight Wolverine until the X-Man manages to escape them. Vindicator states how they need to bring Logan to a lab. A flashback then shows Dr Abraham Cornelius watching Logan in Weapon X and commenting on the Adamantium fusing process. Wolverine then bursts out of the tube that he is in and starts smashing up equipment and computers before escaping from the Weapon X facility.

Back in the present, Jean Grey is trying to use Cerebro to find Professor X but she can not. Back in Canada, Wolverine is finally captures by Alpha Flight and is brought to the lab they were previously talking about. Trapped, Logan is shown that it was actually Heather who lured him back to Canada and planned the attack. Another flashback shows how Wolverine, having just escaped from Weapon X, is found by James and Heather Hudson and is brought back to their cabin. The couple take care of Wolverine and help him recover from the ordeal he was put through at Weapon X. James and Heather then take Logan to Department H and he is put under their service. Logan is then given his uniform and chooses to take the code name 'Wolverine'.

In the present, Logan meets up with General Chasen, the person who originally hired Logan with Department H, and it is revealed that the Canadian Government has been trying and failing to replicate the Adamantium process and they've kidnapped Wolverine because they want to know why it only worked on him. Wolverine refuses to say and so they begin to examine him.

In the Savage Land, Xavier and Magneto meet Vertigo who states how Magneto had been here before and had something to do with 'mutates'. Magneto cuts the ropes on the bridge they are on before Vertigo can say anything else. At the mansion, Jean finds Wolverine through Cerebro and screams out in pain. Rogue, Gambit and Cyclops rush to her aid.

Heather stops Wolverine's examination, much to the displeasure of Chasen, who states that they should just cut Logan open to get to his Adamantium skeleton. Heather resigns from Department H in a fit of anger. Chasen drops some water on a keyboard, which loosens Logan's shackles and Vindicator angrily asks Wolverine why he left them. The rest of Alpha Flight then break down the door and begin to fight the robot guards in the room. Wolverine breaks free and is about to fight Vindicator when Heather persuades him not to. Wolverine tells Alpha Flight not to come looking for him again and he escapes through a hole in the wall, into the woods.