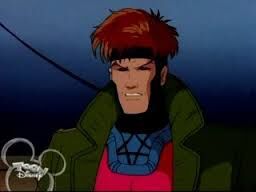 Remy LeBeau is also known as the X-Man, Gambit.

Remy LeBeau was originally raised in the Thieves Guild of New Orleans, rivals of the Assassins Guild. He had a romantic relationship with Bella Donna Boudreaux but later left Bella Donna and the Guilds behind and joined the X-Men. At some point in his life, Remy encountered Ghost Rider.

Whilst with the X-Men, Remy had a complicated relationship with team mate Rogue, who both had romantic feelings for one another but could have an intimate relationship due to Rogue's absorbing powers.

Remy, now with the code name 'Gambit', helped save Jubilee from an attacking Sentinel who was looking for the young mutant. Jubilee later returned the favour twice when the Sentinel was about to kill Gambit and when she thought Wolverine was about to kill him as well. Jubilee later became Gambit's team mate on the X-Men. Gambit, Jubilee and Storm were later sent to Genosha, to investigate the island. Whilst there, the three X-Men were captured by Sentinels and Gambit apparently betrayed his team mates for his own safety. However, it is then revealed that he planned to release the mutants and his captured team mates from the Sentinels and their human controllers, which Cable helped him to do. The three mutants were later rescued by the X-Men.

When Bishop came to the X-Men's time, he accused Gambit of assassinating Senator Kelly and causing a future where the Sentinels controlled a ruined Earth. Gambit, desperate to prove his innocence, stopped the assassin, who turned out to be Mystique in disguise as Gambit.Charles Xavier later went through Gambit's mind to find the identity of Henry Peter Gyrich.

Later, Remy returned to New Orleans and his former love, Bella Donna, when his brother Robert LeBeau, who was supposed to perform the ritual of gifting the X-Ternal, was kidnapped by the assassins guild. Remy managed to free his brother and prevent the killing of Bella Donna, who had been found out that she had given the Thieves Guild a false gift for the X-Ternal. Remy then announced that he would be staying with the X-Men and never returning to New Orleans and the Guilds again.

Remy attended the wedding of his team mates Cyclops and Jean Grey.

Gambit is seen as part of the mutant rebellion.

Gambit was a thief who allied with Jubilee and Logan (Wolverine) against Magnus the Magnificent (Magneto).