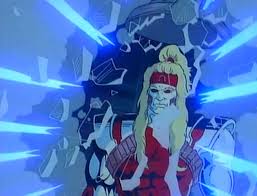 This is the fourth episode of the second season of X-Men: The Animated Series.

Having fell from a waterfall last episode, Professor X and Magneto manage to survive the fall and get out of the water. They briefly converse until a T-Res appears and attacks the pair. Magneto manages to lure the T-Rex over a geyser, which erupts onto the dinosaur, making it retreat.

In Russia, former Soviet soliders ransack the building that was holding Omega Red in cryogenic stasis, and they release the villain. Elsewhere, a group of Russian generals talk about their plan to re-establish the Soviet Union and if releasing Omega was a mistake, when Darkstar walks into the room, informing the men that Omega has been awakened.

In New York, Jubilee is attacked by members of Friends of Humanity in a shop and is almost beaten by the small group until Colossus enters the building and scares away the group. Colossus tells Jubilee that he is seeking the X-Men's help as his family have been driven out of their farm but soliders lead by Omega Red. Jubilee goes off with Colossus and leaves a note for the rest of the team, who are not at the mansion.

Jubilee and Colossus take a jet and fly to Russia to finds its capital in ruins and Colossus fearing for his family. Omega Red is threatening the leaders of Russia to surrender and step down from power. Colossus and Jubilee find Piotr's family's farm in ruins but see that his sister, Illyana Rasputina is still there, having hidden from the soldiers. Back at the X-Mansion, Wolverine sees Jubilee's note and immediately heads off to Russia, having recognised Omega Red as an enemy from his past.

Jubilee, Colossus and Illyana try to free the Rasputin's but they are met by Omega Red, who snatches Illyana and threatens to kill her. However, Wolverine arrives and he fights with Omega Red, who immediately recognises the mutant. The group struggle with Omega Red until they manage to retreat from the villain and Wolverine tells the others about his past dealings with Omega and how the Russian was part of a failed Super Soldier Program the Russians tried during the Cold War. Rogue, Storm and Gambit arrived, having also read Jubilee's note and Colossus rallies a small army to fight the Soviet soldiers and Omega Red. However, the former Soviet army brings tanks to where the group is and starts firing upon them. Darkstar, who was now defected, helps the heroes get the civilians present to safety.

Rogue tries to fight Omega Red but he easily defeats her. Darkstar suggests that they Storm summons a deep cold to put Omega Red back into stasis. This plan works and Omega Red is defeated. Afterwards, Colossus is helping his family repair the farm and is again offered a place with the X-Men but her turns it down.