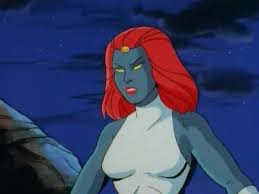 Raven Darkholme is also known as the mutant villain, Mystique.

Mystique has a sketchy past but is known to have had a child with a rich count, Nightcrawler, whom she had to throw in a river to save him from his father, and a child with Sabretooth, Graydon Creed Jr, who was human and grew up to hate all mutants and form the group, Friends of Humanity. Mystique later formed and lead the group, Brotherhood of Evil Mutants, entered the service of Apocalypse and adopted Rogue, who had recently ran away from her home. Mystique trained Rogue to use her powers and had her foster daughter join the brotherhood. This continued until Rogue permanently absorbed the powers of Ms Marvel and became psychologically troubled by Danvers. Rogue sought out solace with Charles Xavier and his X-Men and Mystique vowed to get her back.

Mystique was captured on Genosha, along with the brotherhood and other mutants, but was later freed by the X-Men and Cable. Mystique later disguised herself as Dr Gottfried Adler and based herself on Muir Island, stating that Adler had developed a cure for mutantcy. In fact, the 'cure' was actually a treatment to turn mutants into slaves of Apocalypse. Mystique almost made Rogue into Apocalypse's slave, when she was contemplating removing her mutantcy, but Rogue refused. However, Angel soon received the treatment and became 'Archangel' or 'Death' of the Horsemen of Apocalypse. Mystique later tried to assassinate Senator Kelly but the X-Men and Bishop stopped her. After this, Mystique revealed to Rogue that she was her foster mother.

Spurred on by Mister Sinister, Mystique attempted to gain Rogue back from the X-Men. Mystique tried to make Rogue remember Ms Marvel and her past, which Xavier had erased from her, but Rogue fought with the reawakened Marvel and made peace with her, rejecting Mystique in the process.

Later, Graydon Creed Jr brought together Mystique, Rogue and Nightcrawler and tried to kill them but failed. After Rogue and Nightcrawler demanded answers, Mystique revealed how she abandoned Creed as she didn't want him as her child. Creed then tried tried to shoot Nightcrawler but Mystique took the bullet and fell into the water of a nearby dam. Those present thought her dead but Mystique had secretly survived the fall and went back into the employ of Apocalypse.