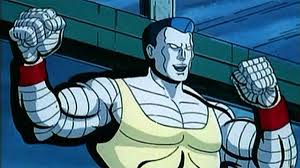 Colossus (born Piotr Rasputin) is a Russian mutant with power to convert the tissues of his entire body into an organic metal substance.

Colossus grew up on a Russian farm with his family and his sister, Illyana Rasputina. Piotr first realised he was a mutant when he instinctively saved his sister from a tractor. After an incident with Russian government equipment, Piotr moved to America for a while. Whilst in America, Colossus began working on a building site, using his powers to easily complete his workload. Wolverine and Jubilee attacked Colossus, thinking he had destroyed Xavier's Institute, but they later realised he was not the culprit. Soon after, Colossus was arrested for robbing a bank, when he had in fact tried to stop the actual robber. Storm and Rogue broke the Russian mutant out of jail and Colossus and the X-Men teamed up against the real robber, and the person who had actually destroyed the mansion, Juggernaut. After defeating the villain, Piotr was offered a place with the X-Men but he denied it although he did help to rebuild the mansion.

When he got back to Russia, Piotr found that Omega Red was let loose on his homeland and so Colossus went back to America and asked the X-Men for help. Colossus was accompanied by Wolverine, Storm, Rogue and Jubilee and together the four went to Russia and fought against Omega Red, managing to freeze him in stasis. Wolverine offered Colossus a place on the team but he refused saying he had too much work to do at his home farm.

Colossus is seen beside the bed of Illyana as she succumbs to the Plague.

Colossus is seen as part of the mutant rebellion.