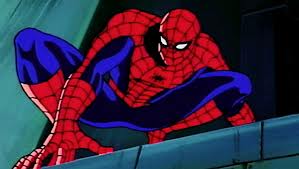 Peter Parker is also known as the superhero, Spider-Man.

When he was just a young boy, Peter's parents Richard Parker and Mary Parker, who were C.I.A agents, were branded as traitors and had to flee the country, leaving young Peter in the care of his Aunt May Parker and his Uncle Ben Parker. The elderly couple raised young Peter, who became fascinated with science and even attended the science camp of Otto Octavius.

During his high school years, Peter attended the science demonstration of Farley Stillwell, where a stray spider was dosed with radiation and managed to bite Peter before it died. Peter raced home, beginning to hallucinate and get a temperature. Peter awoke to find that he had gained the powers of the spider, being able to stick to walls and possess a 'spider-sense' that alerts him of danger. Developing a sticky substance which would allow Peter to swing from tall buildings, as well as a mechanism to shoot the 'webbing' out of, Peter designed his costume and took the name 'Spider-Man'. After appearing on TV, Peter became a wrestling star. After a fight, one night, Peter let a Burglar run by him, saying that it wasn't his responsibility. When Peter arrived home, he found that his Uncle Ben had been shot. Peter traced the killer to an old abandoned warehouse and found that the burglar which he had let go free earlier was the one who killed his uncle. Peter vowed to never let someone else be hurt because he never acted and so he became a superhero.

Peter found himself a job at the Daily Bugle, taking pictures of Spider-Man and also managed to graduate high school and begin studying at Empire State University.

When D'Ken Neramani was threatening the Earth using the powers of the M'Kraan Crystal, Spider-Man was seen helping others.

The first super villain Peter fought was his teacher at university, Dr. Curt Connors, who had turned himself into a man sized 'Lizard'. Peter also fought Scorpion, the Spider Slayers, Mysterio and his old science teacher, Otto Octavius who had become the villain 'Doctor Octopus'. During this time, Peter developed an attraction to Felicia Hardy and Mary Jane Watson.

Peter later acquired an alien symbiote and wore it for a time. The symbiote showed itself as a black costume and was able to simulate various other types of clothing. Peter later learned that the symbiote was living off him and was making him more aggressive so he decided to remove the suit from him. When Peter got rid of the symbiote it bonded to Eddie Brock, forming the villain 'Venom'. Venom and Peter battled but the latter managed to remove the symbiote from Eddie and fasten it to a space shuttle that was taking off. Peter later fought Kraven the Hunter, Hobgoblin and the Chameleon.

Peter later discovered that his powers were mutating him even further and so he sought out Professor X. Xavier said he could not help Peter as his mutation was not natural, like a mutant's would be. Peter later teamed up with the X-Men to defeat Herbert Landon, who had kidnapped Beast and was accidentally turned into a giant, energy draining, monster. Whilst fighting Morbius and the Punisher, Peter's mutation flared up and he turned into the 'Man-Spider', a giant humanoid spider. With the help of the Punisher, Kraven and Mariah Crawford, Spider-Man managed to turn back to normal, but needed regular doses of neogenics to stay human. When the Vulture emerged and stole the youth and powers of Spider-Man, Peter was left as a defenceless old man, without his mutation disease. Curt Connors managed to restore Spider-Man's youth and powers to him but kept the mutation within the Vulture.

After rescuing Mary Jane from Baron Mordo, with help from Doctor Strange and Wong, Peter first met Madame Webb. Webb later guided Peter through next few battles, including Peter's first fight with the Green Goblin, who was revealed to be Norman Osborn, the father of Peter's best friend, Harry Osborn. Peter was later framed by Richard Fisk to be stealing information, after he took a job at Fisk Industries. Peter teamed up with Daredevil to clear his name and he learned that Richard's father, Wilson Fisk is also known as the crime boss 'Kingpin'. Peter later teamed up with Iron Man and War Machine when Venom returned and the symbiote spawned an offspring, which bonded to Cletus Kasady to form 'Carnage'. Peter began to grow close to Mary Jane but after another fight with the Green Goblin, both she and the Goblin ended up trapped in another dimension.

Peter began fighting crime alongside the 'Black Cat', who he later found out to be his friend Felicia Hardy. After Felicia left New York with Morbius and Blade and Peter dealt with the Punisher again, Mary Jane seemingly returned and so she and Peter became engaged. The two were eventually married, after their wedding was attacked by Scorpion and the Green Goblin, which Harry Osborn had recently taken the mantle of.

Peter took a trip to Russia and found out the truth about his parents, that they were not traitors to America and that they were hiding the secret weapon of the Red Skull. During this time, Peter teamed up with Captain America and the Six American Warriors. During their honeymoon, Peter and Mary Jane were attacked by a clone of Hydro-Man and Mary Jane was also revealed to be a clone, just before she passed away.

Madame Webb and the Beyonder then took Peter to fight in the Secret Wars, a contest hosted by the two cosmic entities to see if good or evil would prevail. After the heroes won the contest, Peter was taken to fight against 'Spider-Carnage', an alternate version of Peter that had bonded with the Carnage symbiote and threatened to destroy all reality. Peter joined forces with various other versions of himself and together they defeated Spider-Carnage. Peter and Madame Webb then decided to look for the real Mary Jane, who was still stuck between dimensions.

The 'Scarlet Spider' was seen alongside the Avengers.

Various other versions of Spider-Man were met during the Spider-Wars.