Out of the Past Part 1 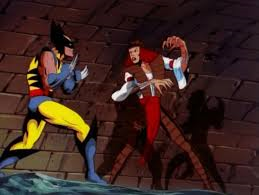 This is the first episode of the third season of X-Men: The Animated Series.

Leech is being chased by the Reavers in a building as the young Morlock had stolen something from Lady Deathstrike. Leech manages to get back to the Morlocks base and gives the device he stole to Callisto, which she wants to use to unlock some alien treasure that she could use to regain her position as leader of the Morlocks. However, Deathstrike and the Reavers arrive at the Morlocks base and open fire. Deathstrike finds this 'alien treasure' which turns out to be an alien spaceship. She plans to use its contents to exact her revenge and goes to rip open the hull with her claws but she is zapped back.

The energy from the spaceship manages to travel towards and hit Professor X who then uses Cerebro to find the source of the energy. Meanwhile, Deathstrike states that her adamantium claws weren't enough and suggests that they use Wolverine to open the spaceship. Elsewhere, Wolverine, Gambit and Jubilee are playing a game of basketball on the mansion's grounds. Wolverine gets a call from Leech who says that a woman named 'Yuriko' is waiting for him in the sewers and the X-Man immediately sets off to meet up with her. Jubilee persuades Gambit to follow Wolverine with her.

The three manage to get to the sewers while Wolverine thinks back to when him and Yuriko were lovers in Japan. It is revealed that he had to leave Yuriko as he had been recruited into Weapon X and so he had to go back to Canada. Back in the present, Wolverine meets up with the Reavers and begins to attack them. After fighting them, Deathstrike appears and Wolverine recognizes her as Yuriko. At first, Wolverine is alarmed at Deathstrike's claws but she explains how she put herself through a procedure similar to the adamantium process that Wolverine was put through, just so she can fight Wolverine. When the X-Man asks why, Deathstrike states how Wolverine killed Kenji Oyama, who was Deathstrike's father. The Reavers manage to subdue Wolverine while Jubilee and Gambit watch in hiding. Jubilee wants to go help her teammate but Gambit stops her, saying they are outnumbered.

The Reavers take Wolverine to the spaceship and untie him, allowing Wolverine to attack them. Gambit and Jubilee arrive and help Wolverine. During the battle Deathstrike becomes ensnared in the ships forcefield once more, and this shocks both Professor X and Deathstrike. Finally, although partially overpowering him, Professor X realizes that it is in fact a psychic message, warning others not to open the ship. However Wolverine is forced to tear a hole in the ship when Deathstrike is unable to free herself. A monster is seen emerging from the hole in the ship bathing the group in a green light.