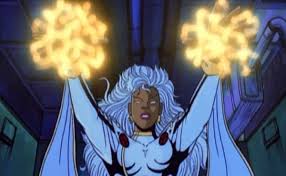 Ororo Munroe is also known as the X-Man, Storm.

Ororo grew up in Africa, as a child, and developed her mutant powers early in life, which she used to aid her village and give them water. Ororo's parents later died in a collapsing building, while Ororo was trapped in a very confined space, which gave her severe claustrophobia. At some point, Ororo saved the life of a dying baby by performing CPR on him. Ororo later became the god-mother of the baby, who was named MjNari. During her orphaned childhood, Ororo was forced into working as a thief for the Shadow King, who at the time was living under the alias of crime lord, Amahl Farouk. Ororo pickpocketed Charles Xavier who later rescued Ororo from the Shadow King by banishing him to another dimension. Ororo then went with Xavier to live with him in America and joined the X-Men under the codename, 'Storm'.

Storm was with the team when Wolverine joined as she noticed how many of the X-Men didn't trust him when he first joined due to his feral, savage nature. Ororo, Rogue and Gambit later saved Jubilee from an attacking Sentinel and it was Storm who told Jubilee who the X-Men are and what they stand for. When Ororo's team mates Cyclops and Jean Grey were kidnapped by the Morlocks, Ororo challenged their leader, Callisto, to a duel for the leadership of the underground mutants. Ororo won so she ordered Scott and Jean to be set free and when she couldn't convince the mutants to return with her to Xavier's Institute, she appointed Callisto to rule in her absence.

Later, Ororo, Jubilee and Gambit were sent to Genosha to investigate the apparently, mutant friendly island. However, the three were later captured by the Sentinels and, along with other captive mutants, forced to wear power nullifying collars and work on a dam. When Ororo tried to escape, she was placed in a small, dark cell which set off her claustrophobia and made her delirious. However, she was soon rescued by the X-Men.

Ororo was present at the wedding of Scott and Jean and even attempted to catch the bouquet. Storm was later hospitalised after Morph tricked a group of police officers to open fire on her. She later left the hospital and returned to the X-Men.

When the Shadow King returned and took possession of MjNari, Storm returned to Africa to save her god-son and defeat her old master once and for all. The Shadow King was later trapped in the dimension that Xavier had placed him in before.

During the aftermath of The Phoenix Saga, Storm was abducted to to the Savage Land by Sauron, who used his hypnotic powers to release the mental inhibitions that kept her from unleashing her powers to their fullest extent. This was done in hopes that Ororo would free Garokk, who absorbed elemental energies such as the kinds she generated. Garokk did break freel however, both he and Sauron were overloaded by Storm's energy, and their clash destroyed Garokk utterly and transformed Sauron back into his human guise of Karl Lykos. Storm would menton as the X-Men returned home that she 'liked letting go," and that never before had she felt so "...free."

Later, Ororo was forced to return to the Morlocks after one of them, Leech, needed urgent medical assistance. Leech was eventually saved by a transfusion from Wolverine and Ororo handed leadership of the Morlocks back to Callisto.

When the alien planet Polemachus experienced meteorologial events that threatened to destroy it uttlerly, its ruler Arkon travelled to Earth to seek aid. There, he used Polemachus technology to simulate the apocalyptic weather conditions of his home planet in Washington, DC, in an attempt to get Storm's attention. He succeeded, and when Ororo and her fellow X-Men arrived in Washington to address the issue, Arkon abducted her and took her back to Polemachus with him. He beseeched Ororo for her aid, and when she succeeded in repairing the damage done to the planet's atmosphere, eventually asked for her hand in marriage, offering ehr the chance to rule Polemachus alongside him as his Queen. Storm initially accepted, but later learned that Arkon was a tyrant, and that Polemachus was enslaving the inhabitants of its neighboring planet, Belgania. Rejecting Arkon's proposal, a heartbroken Storm first lost control of her powers and threatened to plunge the world's atmosphere back into chaos, but then after being talked down by Jubilee, destroyed the Central Energy Transmitter, which was powering Arkon's slavemaster robots and the "control ring" manacles that kept his Belganian slaves under subjugation. Having incited a planet-wide slave rebellion, effectively all but guaranteeing Arkon's deposal, Ororo returned to Earth alongside her fellow X-Men.

Ororo was present when Xavier was taken to the Shi'ar for medical assistance and so, left the X-Men. Ororo was later picked by Spider-Man, whom she had previously worked with before to stop Herbert Landon, to be part of the heroes team in the Secret Wars. She along with the other heroes (apart from Spider-Man) and villains were later returned to Earth.