One Man's Worth Part 1 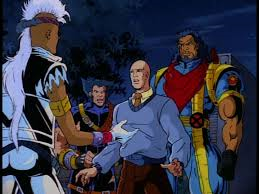 This is the second episode of the fourth season of X-Men: The Animated Series.

In 1959, Bishop fights with Nimrod until Storm manages to destroy the robot while a young Charles Xavier looks on in horror. Questioning why robots from the future are coming to kill him, Xavier accidentally triggers an explosion and dies. In the future, Forge is warned of an anomaly in the time stream and tells Bishop and Shard about it.

In the present, Xavier, Storm and Wolverine are enjoying a picnic together when an explosion of sorts rewrites the time stream. A new timeline emerges, the Age of Apocalypse, and Wolverine and Storm are shown fighting in the ruins of New York City and revealed to be married in this universe. Xavier had died in his youth and so the X-Men were never formed but a large band of mutant rebels exist and are lead by this reality's counterpart to Magneto. The mutant rebels are seen to be fighting the Avengers, who are agents of Apocalypse in this reality.

After a fight between the rebels and Avengers, Bishop and Shard arrive from the future, looking for the X-Men. They find that they are in an alternate universe and deduce that they need to go back further to find the source of the anomaly. They reveal that they have been sent back to stop Trevor Fitzroy, an agent of the future's Master Mold, who has been sent back in time and disrupted the time stream. Recruiting Wolverine and Storm, Bishop and Shard travel back to 1959 to stop Fitzroy.

Arriving in 1959, the group find the young Xavier, who reads Bishop's mind and discovers that they are from the future. Heading to a coffee shop, the group confront a racist man, who is angered by Wolverine (a white man) and Storm (a black woman) holding hands. A fight ensues and a scared Xavier manages to run away, just as Nimrod arrives from the future. Bishop, Shard, Storm and Wolverine fight and defeat Nimrod, losing Fitzroy. Xavier triggers the bomb Fitzroy planted and it explodes.