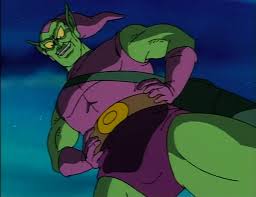 Norman Osborn is also known as the original Green Goblin.

Norman Osborn is the founder and CEO of OsCorp Industries, as well as the father of Harry Osborn. In the debt of the Kingpin, Norman hired Spencer Smythe to create a way of destroying Spider-Man. Spencer created the Black Widow spider slayer which mistook Flash Thomspon for Spider-Man. A fight broke out and OsCorp was caught in an explosion.

Norman later outfitted Jason Macendale Jr with OsCorp tech so that he could become the Hobgoblin and assassinate the Kingpin. Hobgoblin later betrayed both Norman and Kingpin and kidnapped Harry. Spider-Man was able to defeat the villain and save Harry and Norman was forced to sell 50% of his company's shares to the Kingpin to repay his debt.

When Kingpin forced him to create chemical weapons for him, Norman and his partner Wardell Stromm were caught in an explosion where Norman was believed to have perished. Instead, Norman survived the explosion and the gases enhanced his strength and durability but also created a dual personality in Norman. Donning modified Hobgoblin gear, Norman became the Green Goblin and began kidnapping members of the OsCorp board. Spider-Man later defeated Goblin and found out that he was Norman. Norman suffered amnesia and forgot that he was the Green Goblin.

The Green Goblin persona later resurfaced when Norman was put under extreme stress by the Kingpin, who forced Norman to give up the identity of the Hobgoblin. As the Green Goblin, Norman clashed with Spider-Man, Hobgoblin and Spider-Man before acquiring the time dilation deivce, a portal generator. Goblin used this machine to find out the secret identity of Spider-Man and later kidnapped Mary Jane Watson, Peter's love interest, and took her to George Washington Bridge. Goblin and Spider-Man fought and MJ ended up lost in limbo thanks to the time dilation device. Goblin also became trapped by the device and ended up lost in limbo.

Harry soon began hallucinating the Green Goblin which lead him to discover his father's secret identity and become the second Green Goblin.