Night of the Sentinels Part 2 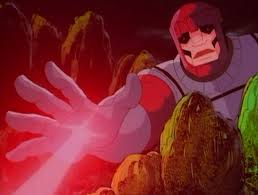 This is the second episode of the first season of X-Men: The Animated Series.

Four X-Men, Wolverine, Storm, Beast and Morph have broken into the Mutant Control Agency's base and are about to walk into a room where, unknown to them, armed guards are waiting for them, until Wolverine smells them and alerts his allies. Storm blasts down the door and knocks all the guards out. Outside of the base several vehicles begin unloading troops and Cyclops, Rogue and Gambit engage them in combat. Back inside the base, Morph manages to clear the file room of soldiers and Beast starts deleting the computers files on known mutants while the other destroying the hard copies.

Meanwhile, Jubilee wakes up in another location to the X-Men and is interrogated by Henry Peter Gyrich about the Sentinel fight at the mall (last episode). Bolivar Trask then enters and he gets into an argument about capturing a mutant so soon and slow production of the Sentinels.

Back at the Mutant Control Agency's base, Wolverine, Storm, Beast and Morph are escaping from the base, having destroyed the files on mutants, when Sentinels ambush them, capture Beast and apparently kill Morph. Despite Wolverine's demands to go back for their team mates the rest of the X-Men escape back to the mansion. When they arrive at the mansion, Cyclops and Wolverine almost get into a fight, until Jean Grey steps in and tells the rest of her team that Beast is still alive but Morph is dead. Wolverine then leaves after tearing the roof off of Cyclops' car.

Beast is arrested and taken into a cell where Gyrich tries to interrogate him but Beast refuses to answer his questions. The President of the United States later appears on television, talking of the mutants attack on the base and how the Sentinels were used to stop them. Cyclops then finds Wolverine and tells him to find the Sentinel's base, which Wolverine agrees to do. Gyrich meets with the President who orders him to stop his mutant registration program, wondering if the X-Men had a good reason to attack the base. Gyrich angrily walks out and receives a call off Jubilee's foster father. Cyclops has arrived at Jubilee's foster parents' house where he tells them that Jubilee may have been kidnapped by the Sentinels but Jubilee's father told him to leave as he was to call Gyrich if anyone came asking about Jubilee. Cyclops then leaves the house and is attacked by a Sentinel but he manages to damage it so it flies off to return to base and, unknown to the Sentinel, the Blackbird is tracking it.

Back at the Sentinel base, where Jubilee is being held captive, Gyrich arrives and tells Trask that they are moving the Sentinel program overseas as they Government had withdrew it's support and their funding may be cut. Just then, the Sentinel Cyclops had damaged, crashed into the base's power generator which causes the electricity in the building to fail and allow Jubilee to escape her confinement. Jubilee is almost attacked by a group of Sentinels before the X-Mena arrive and destroy them. In the battle, Gyrich and Trask manage to escape and the X-Men take Jubilee back home with them.

Jubilee later visits her foster parents and tells them that she will be moving to the Xavier Institute with the X-Men. She then arrives back at the mansion while Scott questions his decision of leaving Beast and Morph behind but Jean tells him he did what he had to do.