Night of the Sentinels Part 1

This is the first episode of the first season of X-Men: The Animated Series. 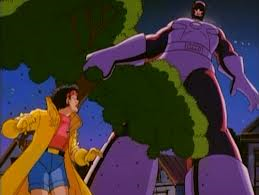 After watching a news report about a mutant attack leading to rising mutant hatred, Jubilee's adoptive parents discuss the possibility of sending Jubilee to the Mutant Control Agency. Jubilee overhears this conversation and decides to run away from home. A Sentinel then lands on Jubilee's street, looking for the young mutant. It breaks the wall into her room but finds that she is not there, leaving Jubilee's adoptive parents petrified.

Jubilee has gone to the mall to play video games when her powers cause the arcade machine she was playing to break. After being chased out the arcade by the owner and customers, who were angry at her for being a mutant, Jubilee runs into two women (who unknown to Jubilee are Storm and Rogue of the X-Men), knocking them over. A Sentinel then breaks into the mall looking for Jubilee. Jubilee and the Sentinel make eye contact before it is attacked by Rogue and Storm. Gambit hears the fight from the shop where he was buying cards and goes down to help. He provides cover fire for Jubilee to escape but when Gambit is almost killed by the Sentinel, Jubilee fires at the Sentinel which brings it's attention back to her and saves Gambit's life. In the mall's car park, the Sentinel shoots knock out gas canisters at Jubilee, before she runs into Cyclops and faints. Cyclops then fires his optic beam at the Sentinel, cutting it's head from it's body.

Jubilee wakes up in a hospital bed, in an infirmary room. She manages to escape the room and see's other members of the X-Men, including Beast and Morph. She then watches a TV screen showing other mutants and a statement from Senator Kelly about how dangerous he thinks mutants are. Professor X and Jean Grey are discussing the fight at the mall until Professor X reads Jubilee's mind and finds out that she is trying to escape and then he sounds an intruder alarm. Jubilee, hearing the alarm, hurriedly tries to escape until she manages to get into the Danger Room where Gambit and Wolverine are having a skirmish. When Jubilee thinks Wolverine is about to kill Gambit, she fires her sparks at Wolverine which send him flying. Morph and Beast then walk in and calm the situation and Storm brings Jubilee to the roof. There she explains that the mansion they are at is a school for teaching mutants how to use their powers responsibly, Professor X is their leader and the mutants here are part of a team called 'X-Men'.

Professor X then hacks into the Sentinel head, which Scott had fired off the Sentinel at the mall, and discovers that the Mutant Control Agency had leaked information about Jubilee and that's how the Sentinel managed to track her. Jubilee then sneaks away back to her foster parents house to see if they are alright. Before she arrives a man, Henry Peter Gyrich, arrives at Jubilee's parents house, asking them if she has had any contact with other mutants to which the parents reply that they don't know as they've only had Jubilee for a year. When Jubilee gets off the bus near her parent's house she is attacked and defeated by a pair of Sentinels who were tracking her.

Back at the mansion, Professor X is organising an attack on the Mutant Control Agency, to stop more information being leaked, when Jean Grey realises that Jubilee is missing. Wolverine then sets off and tracks Jubilee up to her house, where he is unable to detect where she has gone after that. The other X-Men land their plane, the Blackbird, at the Mutant Control Agency's base where Wolverine was waiting for them, stating that he was unable to find Jubilee. Wolverine, Beast, Storm and Morph are sent inside the base, where they manage to disable the security systems and are about to enter a room where a group of armed guards are waiting for them.