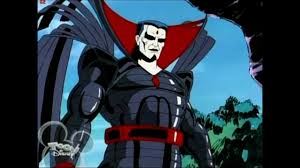 Nathaniel grew up in Victorian London, where he met James Xavier and married Rebecca Grey. When Rebecca became seriously ill, Nathaniel was not allowed to treat his wife, which caused the man to capture mutants and experiment on them to develop a serum which would help cure his wife. Nathaniel took the serum which turned his skin white and gave him his powers. Also experimenting on his wife and curing her, Nathaniel was found out by James who released all the captured mutants. Nathaniel took on the name 'Mister Sinister' after he was chased out of the city and hounded by James. Due to the longevity that the serum gave him, Sinister lived for many more years, in that time establishing the Nasty Boys, a group of mutants loyal to him, and a base in the Savage Land whilst organising a truce with the Savage Land Mutates.

After Morph was left for dead by the X-Men, Sinister rescued the X-Man, restoring him to full health and brainwashing him to hate the X-Men. After Cyclops and Jean Grey were married, Sinister captured the pair whilst they were on their honeymoon. At the same time, Sinister sent Morph to eliminate the other X-Men and organised Professor X and Magneto to be trapped in the Savage Land. The other X-Men later got through Morph's deception and managed to rescue Cyclops and Jean, having their first confrontation with Sinister and the Naughty Boys at the same time.

Sinister later met the X-Men again when they rescued both Professor X and Magneto from the villains clutches. Sinsiter later helped Beast, Magneto and Forge to repel the Phalanx invasion.

Mister Sinister is seen as part of the mutant rebellion.