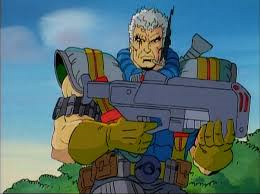 Cable is hinted to be the son of Cyclops and Jean Grey. Little is known about Cable's past save that he comes from a future ruled by Apocalypse and he once travelled to the past to serve in the army of the Leader until he walked out after questioning the ethics of the man. Cable later tracked down the Leader to Genosha and helped Gambit to free the imprisoned mutants. Later, Cable and the X-Men helped to bring the Sentinel manufacturing plant on the island and Cable almost got the chance to shoot both the Leader and Cameron Hodge before a tidal wave from the busted dam washed the three away.

Cable later showed up looking for Dr Gottfried Adler and briefly tackled Angel until he learned that Adler was on Muir Island in Scotland. Arriving on the island, Cable had a brief fight with Pyro and Avalanche before finding Adler's lab. By this time Adler had been kidnapped by Pyro and Avalanche. so Cable and Rogue teamed up to rescue Adler. Fighting off the two mutants, Cable hung Adler over a cliff, threatening to drop him for inventing the mutant nullifying collars used on Genosha, until Mystique revealed that she had been posing as Adler all this time and the real Adler had been killed long ago. Cable was then knocked over a cliff where, unknown to those present, he hung onto the rocks on the other side.

At some point afterwards, Cable's left arm was replaced and he returned to the future, where he had a son Tyler Summers and at some point founded the rebel group, Clan Chosen. Cable fought against Apocalypse, in his own timeline, until it started to be erased along with Tyler. Cable went back in time to stop this erasure and found out that he had to stop Bishop from helping the X-Men to destroy the Techno-Organic Virus, ironically developed by Apocalypse. At first, Cable opposed the X-Men but later slyly used Wolverine and his healing factor to create anti-bodies for the virus. This stopped the erasing of his timeline.

Cable and Tyler, now an adult, later went back in time to help the X-Men stop Apocalypse from using his Lazarus Chamber. Cable, the X-Men and Bishop teamed to destroy the chamber and apparently destroying Apocalypse forever. Cable then went back to his own time with his son.