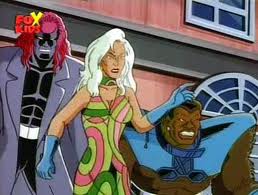 The Nasty Boys are a group of villainous mutants who work for Mister Sinister.

The Nasty Boys were first seen, kidnapping Cyclops and Jean Grey, who were on their honeymoon. The group brought the pair to Sinister but the rest of X-Men arrived and fought the Nasty Boys, eventually forcing the group to retreat. The Nasty Boys later fought the X-Men again, kidnapping Jean and taking her to Sinister's base in the Savage Land. The other X-Men arrived and eventually overwhelmed the villainous group, with help from Magneto, Morph and Ka-Zar. Now with Vertigo in their ranks, the Nasty Boys appeared again under the employ of Apocalypse, hired to kidnap powerful psychics that the villain needed. The group were once again, defeated by the X-Men.