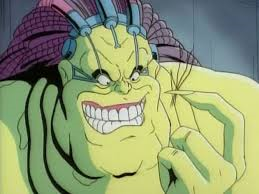 Mojo is the tyrannical ruler of his own dimension, where he hosts televised fights to the death.

Mojo became the ruler of his own world, which he named 'Mojoworld', and decided to entertain his subjects with TV shows with gladiator style fights. When his most favoured star, Longshot, quit after a dispute, Mojo's aide, Major Domo, suggested that the X-Men be used in his place. Mojo sent Spiral to capture them and then he separated the mutant team, placing them in different, lethal shows. Eventually, the captured X-Men regrouped and teamed with Longshot to defeat Mojo.

Later, Longshot rebelled against Mojo and travelled to Earth. Mojo and his forces followed and a fight ensued with the X-Men. Longshot and Mojo later left Earth and returned to Mojoworld to continue their conflict.