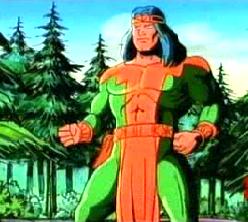 Michael Twoyoungmen is also known as the Canadian hero, Shaman.

Shaman has been a longtime member of Alpha Flight and was present when ex-member, Wolverine was lured back to Canada by Department H. Shaman and Alpha Flight brought Wolverine to a laboratory, where he was examined, painfully. When Alpha Flight found out, they attacked Vindicator and General Chasen, allowing Wolverine to return to the X-Men. Shaman and other members of Alpha Flight were later seen helping civilians when the galaxy was under threat from the M'Kraan crystal.