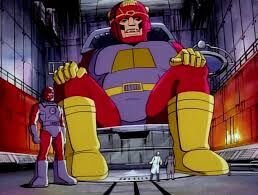 Master Mold was a giant Sentinel who was invented as a mass producer of Sentinels.

After their failure in America, Bolivar Trask and Henry Peter Gyrich moved to Genosha and made Master Mold to help their Sentinel program. Master Mold was draining a lot of power from Genosha's energy grid so the leaders of the island decided to use slave mutants to construct a dam to power Master Mold. This plan continued until Cable and the X-Men arrived, freed the mutant slaves and destroyed the Sentinel plant. Master Mold was seemingly destroyed in the flood from the destroyed dam.

Master Mold, Gyrich and Trask later showed up in America where they kidnapped Senator Kelly and Master Mold usurped control of the Sentinels from his human creators. Master Mold believed that both humans and mutants were the same and so they both needed to be destroyed. Master Mold planned to switch the brains of the leaders of the world with computers but the Professor X and Magneto flew a Blackbird plane filled with explosives into Master Mold and seemingly destroyed it.

However, Master Mold was later revealed to have survived the explosion, albeit with only it's head intact. Master Mold planned to place it's programming into Xavier's brain but was stopped by the X-Men, Morph and a reformed Trask. Master Mold and Trask were seemingly destroyed in an explosion.

In the future of this reality, Master Mold was never destroyed and assumed power over the Earth after he sent Trevor Fitzroy and Nimrod back in time to kill a young Charles Xavier. However, Bishop, Shard and alternate versions of Wolverine and Storm, as well as Fitzroy himself when he learned that Master Mold was going to kill him after the assassination, foiled the killing. As a result, Master Mold's tyrannical rule was wiped out from history.